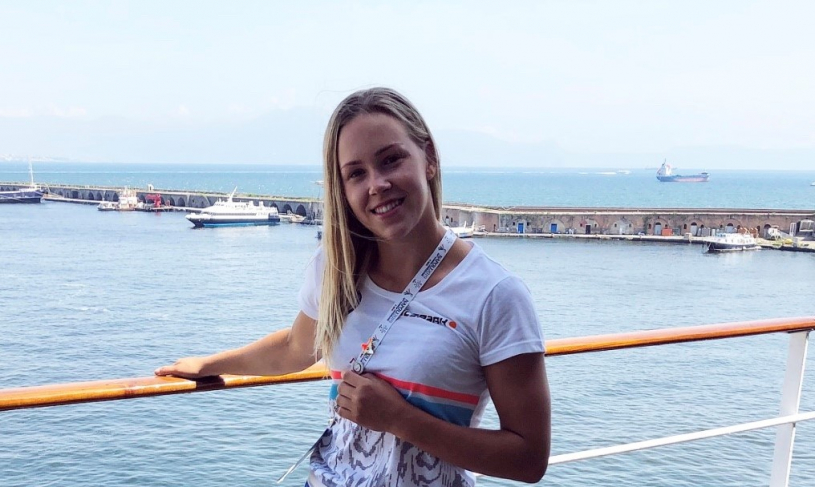 Pihla Matikainen trains judo for 24 hours a week. The Finnish champion in her weight class works at the YTK among unemployment security and studies law at the University of Turku. The key to coping lies in focusing only on the essentials.

A usual week for the 24-year-old Bachelor of Laws Pihla Matikainen goes like this: two working days a week she works among unemployment security. Training six days a week – two-hour workouts both in the morning and in the evening. Studying in-between those.

Her everyday life sounds full, but according to Matikainen, it doesn't feel too stressful. What is essential is that judo, her studies and work feel meaningful and move her in the right direction.

"Of course, everyday life is quite full, but there is no work on the weekends and I often do fewer schoolwork. I keep weekend nights completely free so there's clear leisure time and rhythm in the week. I have time to do everything I want to do."

Managing everyday life is made easier by her field of study. Law studies at university largely consist of independent studying.

" Law studies are more relaxed than usually thought. It is also really self-reliant. The current times of distance learning have further highlighted this. I like being able to organize the day myself. It also fits well with my sport."

At the time being, Matikainen, who is completing her master's degree, is open about her professional future.

"I don't have any strong orientation yet. I want to try different jobs. Starting my own business could be the culmination of my career."

Pihla Matikainen started practicing judo as a child. The sport was already present in the family circle in Southwest Finland, and 9-year-old Pihla was placed in a beginner's course. The demandingly technical sport did not immediately draw her in.

"The first couple of years felt like this wasn't funny at all, and I kept wondering if judo was my thing. The techniques were really difficult and there were no great experiences of success. However, there was a good community in the small sport club, which provided support. Everyone knew each other."

After a few years, her enthusiasm for the sport began to grow. A difficult start turned into love through routine.

"Suddenly there was a big leap forward in my skills. It felt nice to know how to do things that other people can't, and I found myself getting better all the time. I realized the finesse of the sport."

The leap carried a long way. Pihla Matikainen won the Finnish championship in the under-57 kg weight class in 2019 and a new title last year. Now her aim is to rise to the top of Europe. One has to work hard to get there.

"The sights are on the championships. In Finland, I am now at the top, and I am in the top three of the Nordic countries. However, it's a very long road to the top of Europe, which is practically the top in the world. It could take many years to get there. It can be that for many years in a row you can kicked by everyone, and then at some point you wont get kicked by everyone anymore."

Pihla Matikainen started work at YTK in May 2020. She came along to ease the rush caused by the coronavirus. YTK employs many other law students, but the fact that Matikainen ended up working with unemployment security was partly the result of chance.

"I haven't been working much in summers, because there are so many camps and races in the summer. I've done mostly short-term work in the past. The calendar for summer 2020 was emptied due to the pandemic, so I started looking for full-time summer jobs. I came across YTK, I became interested and originally applied for benefit processing. I was contacted and told that they need someone to write appeal statements, and I got hired. Starting in autumn 2020, I continued as a part-time employee."

According to Matikainen, YTK's appeal emphasises independence, which is further enhanced by the current times of remote working.

"Work is pretty much writing, which suits me. Writing has always been easy and natural, and of course I have learned more of it in my job. The most difficult part of the job are the constant changes in the law. It's difficult to find a routine, especially since the Unemployment Security Act is already so complicated. Every months, new things come up that you have to find out about. It is not very easy for applicants to anticipate the complex law and code of conduct, either."

In difficult situations, the support of your own team is emphasised.

"At first, there was a lot of turnover in the team, but now I feel like we've found a pretty clear tune in who to ask for help. The threshold for the communicating is low. Even the most difficult cases, you don't have to carry on your own, instead, the team is always available to help when necessary."