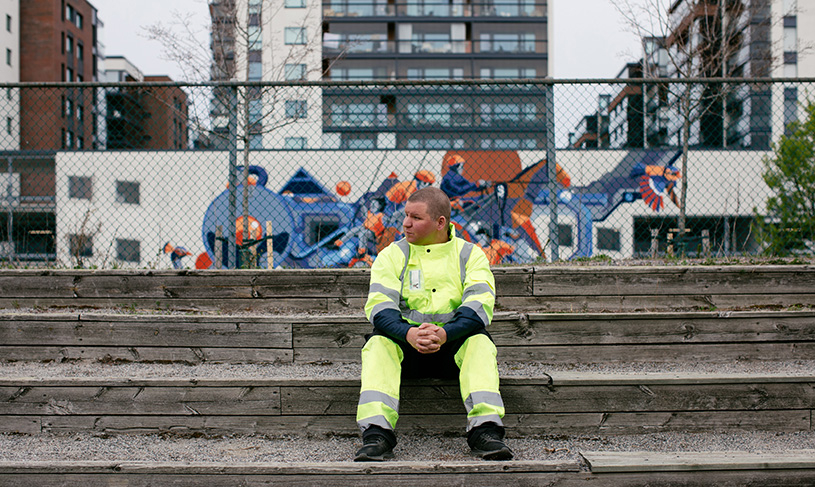 Ville Valtonen, who does seasonal and contract work, is pleased with his decision to secure his earnings and become a member of the YTK Unemployment Fund. Before joining the fund, he had never heard of adjusted daily allowance.

Ville Valtonen's job stands in everyone's way, quite literally on the road. Valtonen, who works as a traffic controller for asphalt paving sites, wanted to change jobs in the retail sector and applied to work for an employer doing road contracts four years ago.

In April, when the snow melts, the work begins. The work is made until the ground freezes and the snow arrives, sometime until December. In coastal areas, the sea extends the season for construction sites.

– The working days are long, with an average of 9–10 hours. On hot summer days, asphalt takes time to cool down and cannot be accelerated even if other work can be done faster, Valtonen says.

Valtonen's tasks include transporting a escort car in front of a hose bypassing the road site, marking the construction site area and traffic control on roads and junctions.

The demanding nature of the traffic controller's work surprised the first-timer at the time. The fact that cars move safely, smoothly and in the right order requires a certain precision and logic. Valtonen has learned, gained more responsibility and praise for his work. A place in the group has been redeemed with its own expertise.

– When the season ends, some of the employees go traveling, others do something else. I've been resting and traveling, but I've also done short-term work at the grocery store and driving a delivery truck.

Safety and security in working life

When he started asphalt paving work, Valtonen considered the wage uncertainty brought by seasonal and contract work. Others recommended a union in their own sector as a safeguard, but Valtonen in particular became interested in the recommendation concerning the Unemployment Fund YTK.

The fund's fixed annual fee of 115 € and the 22 € association membership fee with benefits attracted, sounded almost too good to be true. The price difference to the previous union and unemployment fund membership was wild.

– People are strange: at first, they always doubt a good deal. There has been no need to regret this decision, Valtonen laughs.

A year and a half ago, Valtonen injured his knee in his beloved hobby, baseball. While taking the sick leave slip he received from the emergency room to his employer on his crutches, the secretary asked Valtonen why he did not go to a private medical clinic with the injury. The leisure time accident insurance, which is part of the benefits as a combined member of the YTK, would certainly compensate him.

Valtonen was amazed. He was unaware of the YTK's benefits and was grateful for the secretary's remark.

– I didn't know anything about the benefits! I became a combined member, as the price was so affordable, without further investigation, Valtonen says.

The knee injury was repaired at Pohjola Hospital by rehabilitating, and fortunately there was no need for a surgery. Valtonen gives praise to the hospital as well as to YTK.

– Everything went really easy and conveniently. Since then, I have become acquainted with other benefits of the YTK online, although I have not yet been in need of all of them.

The adjusted daily allowance was another matter that Valtonen knew nothing about beforehand. He had previously only been in permanent jobs, and the need for an adjusted allowance had never come up before. Towards the end of the season, however, the number of road construction contracts decreases, and as everything has become more expensive, his financial situation has sometimes been poor.

According to Valtonen, YTK’s customer service is easy to contact, its services have been fair and helpful and assistance has been available for all his problems. The possibilities available during the winter period when he has no salary income have been openly communicated in a people-oriented way. YTK has also been flexible with the membership fee payment falling due in the beginning of the year.

“All questions have always been answered kindly and without delay and that, if anything, is more than important in an uncertain and uncomfortable situation,” Valtonen sums up.

Self-control and understanding for those travelling on the roads

Seasonal work is a choice. In good weather, outdoor work is the best there is for Valtonen, who likes cars. The scorching hot days are exhausting and even tough, and rainy weather is another story completely.

Valtonen does not consider his job particularly dangerous, but he does wish that motorists would remain considerate and understanding. There are people working on the road construction sites. No one should be in such a hurry as to pose a danger to those doing their job.

“At times, yes, I am a bit scared. Fortunately, nothing really bad has happened, and there have been no big consequences so far. When you gain more experience, you also know how to be more careful,” says Valtonen.

Listening to music and the use of earbuds at the sites is prohibited. You need to be able to hear the emergency vehicles and observe the environment around you with all your senses alert.

“You get used to the machinery, cars and the vehicles overtaking you when working in the midst of traffic all day long, and you may not be as careful as you should be if a driver approaches you from behind driving much faster than the speed limit. Slow down in time. If every motorist would just keep this in mind once the road construction season starts again, Valtonen hopes.