Skip to content
Topical / News archive / “Courage means doing something even when the outcome is uncertain.” – More than 8,000 YTK members told us about their courageous choices in working life 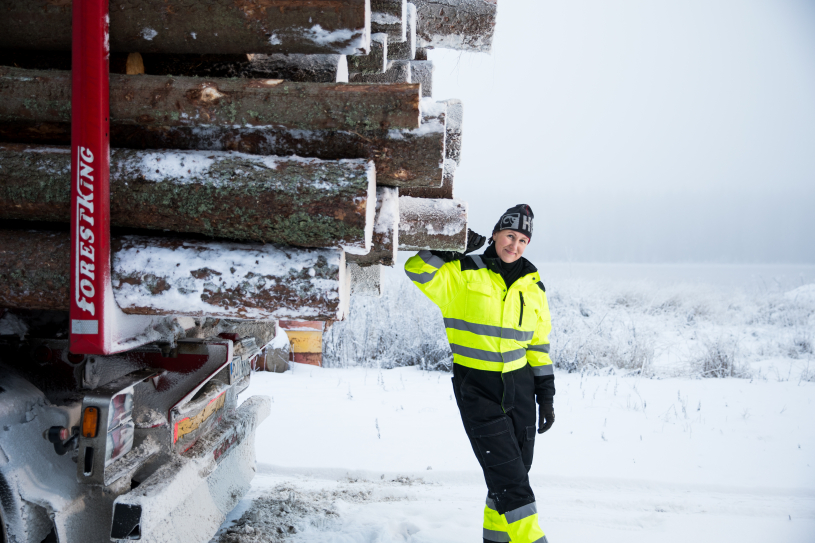 Change.
This was a recurring theme among the responses of YTK’s members when they were asked about courageous choices they had made in working life. Many felt it was a bold move to switch to a new industry, change jobs, become entrepreneurs, or leave a job without knowing what the future would hold. Some needed courage to move to a new town or country.

“I studied nursing, but it wasn’t for me. So before I turned 30, I decided to get an HGV licence. I soon found myself in the cab of a log truck. I would never have dreamed of it when I was young, but I’ve been driving for 15 years now, and I feel like I’ve found my place in the world,” said Mira Heikkilä from Loimaa in response to YTK’s survey.

What do experts say on this topic? Why do the responses focus on tangible transitions?

“It is only natural that major career changes are the first things that come to mind.  Day-to-day activities and social courage are often harder to identify,” says Anniina Virtanen, a researcher at the Finnish Institute of Occupational Health.

Virtanen points out that there are several definitions of courage, but they share the idea of taking some sort of risk.

“Courage means doing something even when the outcome is uncertain. Something that feels right, although we do not know whether it will work out.”

A major focus of Virtanen’s research has been social courage in working life, which means doing something for the greater good, such as intervening in inappropriate behaviour. In addition, courage in working life can be very tangible and physical, as demonstrated by the police, ambulance service and fire brigade.

Mira Heikkilä knows that courage comes in many forms. She has made two career changes so far: first, she switched from nursing to lorry driving, and later on, she worked at a lunch restaurant for just short of a year. When her maternity leave is over, she plans to get back behind the wheel of the log truck.

“The thing that requires the most courage in a normal working day is when the lorry gets stuck on a slippery slope. Then I’m all alone, wondering what I’m going to do about it. Or, in the worst cases, I’m not alone because I’m holding up a long line of car traffic,” Heikkilä smiles.

There are very few women in the lorry-driving field, and Heikkilä admits that this calls for a certain type of courage.

“It’s true that women are still treated differently as lorry drivers. But you just need to trust in your abilities and know you can get the job done as well as anybody.”

And, on the other hand, the fact that the sector is male-dominated is one reason Heikkilä feels at home in forestry work.

“It suits me to work with the no-nonsense mindset that men have. In the hospital world, I found it hard to get on with the hierarchy, in particular, but the female-dominated community also didn’t feel right for me.”

Researcher Anniina Virtanen notes that courage in working life can be viewed from the standpoint of the individual or the community.

“From the individual perspective, it can mean living the life you want to live and making the changes required for it. It is more natural to change places if you feel like you are in the wrong place.

However, if a person finds the work community important, they will be more motivated to change things from within,” Virtanen says. She points out that the increase in remote working presents a new angle on this.

“A lot has been said about how the community can easily feel more distant when people work remotely and focus only on their own work. People may make more individual choices. It will be interesting to see what the research will say about this.”

Tiina Virta has boldly pursued her passion ever since she discovered it.

“There was nothing actually wrong with working as an accountant, but it was just a job. It was back when computers were first taking over offices. One of my colleagues noticed how I always knew what to do if other people were having computer issues. She told me about a course for PC support staff at the business college. So I applied for it, and it only took a week for me to realise that computers would be my thing!” says Virta, recalling her studies in the late 1990s.

Since then, Virta’s career has progressed almost in lockstep with the development of computers. First, she completed a Bachelor’s degree in data processing. Then, about a decade later, she completed a postgraduate degree at a university of applied science. Her latest qualification is a Master’s degree in cybersecurity from the University of Jyväskylä. She worked in the IT sector between her studies, and even spent five years in England.

“I don’t feel like I’ve done anything particularly courageous. I just really wanted to learn interesting things, and they inspired me to set goals for myself.”

Virta was never particularly put off – not even as a recent graduate with a Master’s degree in cybersecurity and as a 55-year-old unemployed woman. She was perhaps a little nervous, though.

“I was often invited for interviews, but it always felt as if a 30-something man got the job instead. It was a bit frightening when I felt I was the wrong gender and too old... But I just had to trust in myself and my expertise.”

And just over nine months later, her trust was rewarded: Virta landed a permanent job doing what she is most passionate about – information security.

“I enjoy every day! It feels like I’ve been chasing after dreams my whole life, and one by one, they’ve actually come true. But it’s taken grit to reach this stage because I did all my studies while working. Of course, I’ve also enjoyed some luck and happy coincidences along the way.”

Is it necessary to be bold in working life?

According to researcher Anniina Virtanen, the things other people consider courageous in working life might not feel particularly brave to those who do them.

“Choices and changes may feel like natural transitions or happenstance, but they can look like courageous actions to outsiders.”

According to Virtanen, it may take courage to resist change in working life or refuse to become involved in something that is incompatible with one’s values.

But is courage always virtuous? Is it necessary to be bold in working life?

“This is a good perspective. Courage is generally considered a respected and positive characteristic, but it is not just black and white: there is a spectrum between wise courage and bold foolhardiness.”

Virtanen also points out that courage is not just a characteristic of an individual. Circumstances have a big impact on how easy it is to be bold.

“It is a lot easier to make bold choices when you are in a strong position with a safety net to back you up.”

Many of the respondents to YTK’s Jäsenpulssi member survey felt they had not made any courageous career choices. Some regretted this, while others were content with it: there was no need for special bravery because everything was fine.